“If one wanted to depict the whole thing graphically, every episode, with its climax, would require a three-dimensional, or, rather, no model: every experience is unrepeatable. What makes lovemaking and reading resemble each other most is that within both of them times and spaces open, different from measurable time and space.”

How can a marijuana high enhance sex – if used with skills and knowledge under favorable circumstances? My short answer is: in many more ways than are usually cited. Even experts strongly underrate the wide spectrum of psychological effects of a marijuana high. I call this spectrum the psychological “effect-bouquet” of the high. The high affects a whole range of cognitive and physiological functions, from episodic memory, attention, and pattern recognition to the alteration of our sense of time, the perception of our body, imagination, creative thinking, and empathic understanding. Each of these functions can play a crucial role in the enhancement of sexual encounters. So, let me give you a short survey of the many ways in which these effects can enhance sex.

The Cannabis High – An Effect-Bouquet

Cannabis has been used for thousands of years for many purposes and many cultures and subcultures worldwide have explored its value for sex throughout history. In the region of the northern Himalayas and India, cannabis has been used since pre-historic times in shamanism. In some lineages of the tantric tradition, cannabis was used to induce a meditative state, to bring one’s mind back to the “here-an-now” of the moment, and to ultimately come to a state of enlightenment through sexual practices. These ancient uses of cannabis by far surpass our current Western understanding both of the potential of the sexual experience itself as well as the potential of a marijuana high for its enhancement.

But even without such tantric knowledge, innumerable contemporary marijuana users have rediscovered various uses of the marijuana high to enhance their sex lives. When high, they focus their attention on the here-and-now and relax; they forget about a previous verbal fight with their partner, about an upcoming exam the next day. In this space, they concentrate on their own body, and on their partner, his or her current needs, longings, desires. Their attention often tends to be redirected to the body.[1] Bodily sensations are intensified and experienced in more depth; the touch of lips during kissing, scents, stroking – everything appears more intense, but also more detailed in perception. 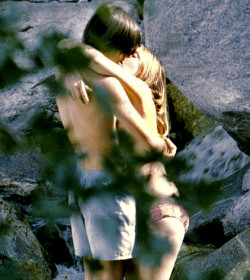 All of the effects cited so far have been quoted by others when it comes to the positive effects of the high on sex – but these are only the beginning. One of the most important yet often ignored enhancements during a high is described in a tale from the Arabian story collection One Thousand and One Nights, where a stoner obviously “trips” on a large amount of hashish and comes back to his senses in a public bath:

„He opened his eyes and found himself lying on the marge of the cold-water tank, amongst a crowd of people all laughing at him; for his prickle was at point and the napkin had slipped from his middle. So he knew that all this was but a confusion of dreams and an illusion of Hashish (…)”[3]

During a strong high under such a large dosage, cannabis users have often reported “visual trips”; but even for moderate dosages of marijuana, imaginative abilities can become enhanced. Imagination plays a crucial role for sex, but when it comes to the subject of marijuana and sex commentators forget to mention this enhancement during a high.

Furthermore, innumerable marijuana users have described an enhanced ability for  pattern recognition during a high. They discover a rigid pattern in their own walking style, or a disposition for defensive behavior in a chess opponent. During high sex, enhanced pattern recognition can become helpful in many ways. Itcan help to recognize a mood better in a partner’s body language, or to recognize a boring sexual routine one has been going through for a while with one’s partner – which helps to then transcend the routine.

Many users have reported that they become too introspective during sex, which definitely does not help with the experience. Dosage, skills, mood, attitude, and context seem to play a crucial role here. For many others, however, the high not only generates strong feelings of intimacy, but leads to a truly deeper empathic understanding of the other’s character, needs, and wishes, based on various patterns in a partner’s body language, in the tone of what is said, or in facial gestures. This enhancement of empathic under-standing is fundamental to sex, which is like a dance, a form of communication in constant need of new common explorations and fascinating discoveries.

Which brings us to one more fundamental effect of the high, the enhancement of creativity. High lovers often break with routines and become creative during their lovemaking. Additionally, the high can bring an anxiolytic effect, which helps to overcome moral and other inhibitions. This can be a major factor for entering a true energetic sexual flow. As Jim Morrison once said:

“Sex is full of lies. The body tries to tell the truth. But, it’s usually too battered with rules to be heard, and bound with pretenses so it can hardly move. We cripple ourselves with lies.”

To summarize, then, there is a whole bouquet of effects during a high which can all be profoundly useful for the enhancement of sex. During sex you experience the richness and uniqueness of various altered states of consciousness which culminate in an orgasm. All of these mind enhancements during a high described above can thoroughly enrich sexual encounters and give a profoundly new meaning to the experience.

Are there other, more direct physiological ways in which marijuana can work as an aphrodisiac? What, exactly, can a cannabis oil do for a woman if applied in her vagina? Despite a lot of anecdotal evidence of the aphrodisiac effects of marijuana, we haven’t really yet begun to research these questions.

If we want to come to a better understanding of how much cannabis can do for sex, we need to further investigate the entourage effect marijuana: cannabis expresses more than 100 cannabinoids, around 200 terpenes, and some flavonoids, which synergistically interact and generate various highs through an “entourage effect”. [4] The unique “effect bouquet” of marijuana described above varies significantly for each strain and depends on its unique composition. Users will have to find which strain works best for them. Meanwhile, some breeders are striving to create specific ‘sex-pot’-strains.

Maybe some Tantric herbalists created the most incredible strains for sex a long time ago. There is pleasurable journey ahead for all of us – a journey that began thousands of years ago.

This article was first published on http://sensiseeds.com/en/blog/what-a-high-can-do-for-sex/